We have just revised the AH-EPS v2.0 vowel clock. I say "we" because Karen redesigned the clock to include all of the key words and symbols. I added a new colour overlay to her design that is, I think, a little more compatible with the general phonaesthetic qualities of the visual field. (See earlier post related to the colour issue with the popular Color Vowel Chart.) Kudos to Karen. Will have various v3.0 sizes available on website, too. 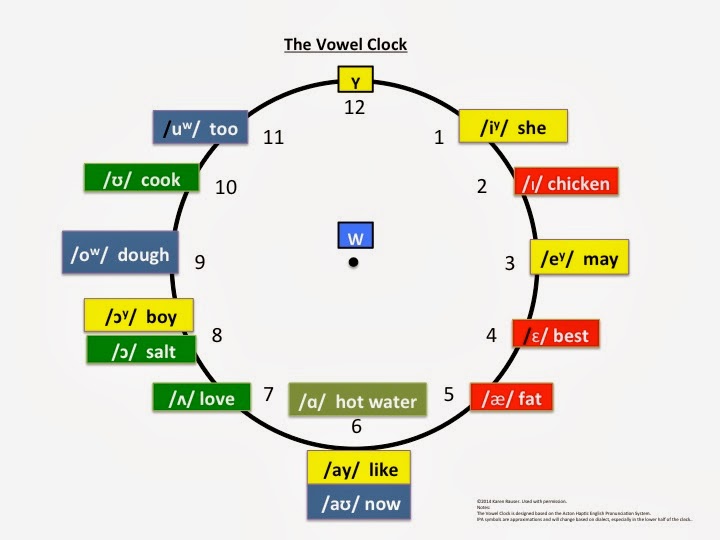 Correct pronunciation by talking about it: Think or swim . . .

Ever notice how students often will not notice well enough to "get it"  when you point out a pronunciation issue for them and skillfully provide them with a preferred form on the spot?

A recent study of noticing by Hanna, Mullainathan and Scwartzstein (2012) suggests something of why from a different perspective. When their subjects, seaweed farmers, were presented with data that was potentially very valuable for them in improving their work and problem solving, they didn't "uptake" much either--unless the relevance of the key elements was also explicitly linked back to why they were critical or relevant.

In other words, the new data had to be immediately linked (somehow) to acknowledged and perceived (or felt) relevance, what we (following Gendlin, 1972) refer to as "felt sense." In pronunciation teaching with adults, that at least means "getting back in touch with" earlier explicit explanation and guided practice. The problem is often, without sufficient physical experience and practice of the sound change in the first place or in the referring "teachable moment," there is little chance for most that merely pointing out or covertly throwing in correct models is going to work.

And taking valuable class time in the middle of a content-based discussion, for example, to go into an impromptu explanation right there as to why that particular sound issue is important to intelligibility for some subset of learners will probably not be productive either. So what should you do?

What does work, in our experience, in EHIEP/AHEPS, is haptic anchoring (gesture + touch on stressed words or syllables), that is much more strongly body-based initial experience of the sound or word. Having intensely experienced the physical properties of the sound early on, learners then have better access to that anchor when it is activated in a meaningful context. (The basic trick involved in hypnotic suggestion.) The primary contribution of haptic engagement in pronunciation learning or any learning system is integrating the senses, providing the link back to the experience and sound later.

That way, in spontaneous conversation or classroom talk, after a problematic word or stress pattern occurs, with a quick "haptic-anchored noticing" as the word is repeated by the instructor, often w/out even saying the word out loud, the connection is made. The same principle holds if the instructor, aware of a feature that a student or students are working on, haptically anchors some element as he or she produces it in doing an explanation or providing a comment: the visual gesture accompanying the spoken word is often enough for students to "feel" and register that token.

How well that works consistently is, of course, an empirical question, one that can and will be researched in time. In the meantime, take it from the seaweed farmers. The only way to experience this level of somatic, whole-body, experiential learning . . . is to jump in the (haptic teaching) water .  .  . and notice what happens. As we say, "Think or swim . . . take your pick!

Get ready . . . AH-EPS does NOT (by design) do everything! What it does it does exceedingly well, however. It focuses on integrated teaching and change, real time interaction between instructor and student: how to talk and anchor change in class, live.

In some cases and classes it may need to be complemented or expanded upon. ("Compliments," it always has lots of!)  Here are my three recommendations, what you should have either on your bookshelf or bookmarked:

AH-EPS haptic video work (in 30-minute weekly lessons with optional homework) presents the English sound system as a whole and teaches students a set of gesture-based procedures that they and their instructor can use every day in modelling and correcting pronunciation.  (There are additional video lessons with each module for students to practice on their own, if their instructor does attend to pronunciation in regular speaking and listening instruction.)

It is generally adaptable to any proficiency level, any age learner or amount of instructor experience in pronunciation teaching. If, however, you only have time or money to go with one system,  I'd still recommend this for starters:

Posted by Bill Acton at 9:39 AM No comments:

This is big. AH-EPS v2.0 and the new ActonHaptic website are ready. On the website are links to everything you need to do "haptic." Reviews on the new system have been great. AH-EPS has been about 10 years in the making. It can be adapted for any group of students, either by letting me do the initial teaching on video for you (See previous "FLIP" post!) or you take a little time to train yourself and do it yourself.
For starters, I'd recommend one of the two sets below. The introductory offer on "AH-EPS v2.0 Package" provides the complete set of tools, including Instructor and Student DVD sets, hardcopies of both books, 4 months of streaming on Vimeo.com and a webcam consultation with me to help you set it up, if necessary--or just share the fun.
The other option, AH-EPS v2.0 Intro Lite, has the same basic stuff but does not include the DVDs and hard copies. This is a good choice if you'd prefer to just get up to speed quickly with the latest developments or even to work through parts of it yourself to tune up your "pedagogical English body and voice" or your accent.
And, if you post one of those GETONIC popshops on your website or blog or social media site, every time somebody purchases what is on that tag you get a 5% commission! Keep in touch!

Posted by Bill Acton at 6:03 AM No comments:

Nice piece (originally published in Bilingual Basics, August 2013) in TESOL Connections this month entitled, "Three reasons to flip your classroom," by Marshall. A few previous posts have looked at the case for "flipping," that is using video to present concepts and then following up with various forms of in class collaboration and engagement. This is the first that I have seen that specifically addresses "flip" methodology in working with English language learners.

The AH-EPS "method" uses something of the same format:


If you are not already a "haptician," it may be time to consider flipping . . . Go to the new Acton Haptic website to get started!

Keep in touch!
Posted by Bill Acton at 9:00 AM No comments: