Distracting new research: Try some "strategic attention" or a millennial!

This could be either a sign of things to come or at least a pleasant "distraction."

I have done literally dozens of blogposts here (out of the roughly 1,000) that involve in some way the concept of "attention". Likewise, in our decade or so of experience with haptic pronunciation teaching, capturing the learner's attention--for at least 3 seconds--has been shown to be critical. Any number of factors may serve to seriously distract the student and undermine the process.


Now comes a study, Selectively Distracted: Divided Attention and Memory for Important Information, by Middlebrooks, Kerr, and Castel of UCLA, summarized by Sciencedaily.com, suggesting that background distraction can be overcome . . . by "strategic attention", characterized this way:

"The ability to prioritize high-value information during study was consistently immune to the effects of divided attention, regardless of the extent of the distractions that participants faced . . . the current results intimate that divided attention did not incapacitate metacognitive mechanisms in either of the current experiments leaving participants capable of judging their memory capacity, performance, and methods by which they might compensate for additional demands on attention (p. 32)"

Subjects were subjected to various distractions while learning sets of words, such music and having to attend to random numbers during the treatment phase. Although overall performance/recall was not quite as high among the "distracted", they were later equally successful in recalling key words in the post tests.

This sounds like partial validation of the "hyper-cognitivist's" position that just by pointing out (pronunciation) errors or pointing to key (phonological) features in texts, for example, learners may "uptake" such focused input and effectively make use of that information later. Could be. We have all witnessed such potentially "teachable moments", but with so many other things going on in the classroom environment, what are the chances, really?

According to the study, it all comes down to what has been prioritized by the learner, the instructor and the context. Wow. But wait . . . just who were the subjects? Any chance that they were just more naturally adept at dealing with distraction? 192 paid undergraduates, probably in introductory psychology courses, the usual guinea pigs in such studies. Interestingly, the researchers do not comment on the young millennials' social media competence.

Any number of other recent studies have observed, seemingly to the contrary, that the "hyper-media generation" is in some respects less capable of keeping their eye on the ball. (Even the NBA has gotten the message, planning to shorten games!) Surprise . . .

The good news: Perhaps upcoming generations are in fact becoming more "immune" to distraction in learning and studying, especially in certain e-contexts.  If so, that has intriguing implications for instructional design and tolerance for random iPhone use in class.

The bad news: Wonky studies like this one can easily distract us (or at least me!) from the more important work of creating classrooms where our priority, our attention is focused totally on effective teaching and learning. Just thought that I should point that out . . .

If your organization would be interested in a 2-hour, highly interactive, experiential webinar on haptic pronunciation teaching (and you should be!), we have the answer! Our new haptic "work-inar" on English pronunciation! 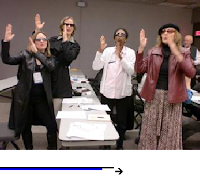 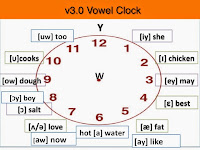 Dates are available beginning in mid-August. The format looks like this:
Like all haptic workshops and presentations, it involves a great deal of participant engagement, including mirroring of the pedagogical gestures of the presenter (Bill Acton or colleague) and occasional "dancing" to the various rhythms of the webinar.

There is no charge for this basic v4.0 EHIEP (Essential Haptic-integrated English Pronunciation) webinar--other than the usual, tasteful, low key promotion of all things ActonHaptic.com--although there may be some additional fee attached if it is extensively customized for a local population or if by agreement there is some structured follow up, etc. In late Spring 2018 v5.0 of the haptic pronunciation teaching system and webinar will be rolled out as well!

The idea right now is just to further get out the "haptic word" to the profession.

Good vibrations: Why the kazoo works in teaching intonation!

I frequently find reports of studies that have striking conclusions that I'd really love to believe are valid--but do not provide quite enough detail.  Here's one: Haptic learning system for learning Chinese by Jung, Hwang, and Kyung, Dept. of Digital Media, Ajou University, Korea. A neat little study, nonetheless, one that may suggest some interesting follow up.

The experiment was seemingly straightforward. Subjects in the control group were presented with a  traditional audio/visual presentation of a set of target words and asked to memorize them. (Nothing was published as to exactly what the subjects did on their own from that point.) The treatment group, in addition to the same audio/visual presentation, simultaneously were touching a device that provided them with "feel" or vibrations of different frequencies of the different phonemic tones of the Chinese words as they heard them. Not surprisingly, the "haptic" group performed far better on the subsequent recall test, (p<.05).

Have seen no previous study that used a similar procedure. The popular use of hand-held kazoos in teaching English intonation, however, provides something of the same varied tonal vibrations. Judy Gilbert has been a "Kazoo-enthusiast" for decades, using them in virtually every teacher training workshop. I have been skeptical of their use in the classroom, for a number of reasons, but in teacher training, they definitely have a place.

In haptic pronunciation teaching we use a strong focus on vocal resonance, trying to create as much rich vibration in the bones and sinus cavities as possible to enhance memory for sounds and words, along with controlled gestures, what we term: pedagogical movement patterns. One could easily design an analogous hand-held device that would provide something of the same kind of haptic/tactile input as in the Jung et al. study.  Just need to figure out how to get a similar "buzz" on in our EHIEP haptic research!

If you have an idea how to do that, let us know!

Posted by Bill Acton at 6:25 PM No comments: