Why does haptic pronunciation teaching work?

Good question! Here is an excerpt from the new Haptic Pronunciation Teaching - English (HaPT-E) Instructor notes. (If you'd like to preview the first 2 modules of the course (no charge) and get a free a copy of the Instructor Notes, contact: info@actonhaptic.com) 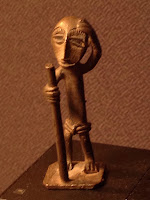 See also the YouTube summaries of the main modules from v3.0 (Not great video quality but reasonably informative.)

Posted by Bill Acton at 1:58 PM No comments:

Invisible pronunciation: What you see is not necessarily what you get.

Nice new study by Smotrova "Making Pronunciation Visible: Gesture In Teaching Pronunciation", in
press, in TESOL Quarterly, examining in depth the pedagogical gestures used by a pronunciation teacher. She had devised an ingenious set of gestures to signal various aspects of pronunciation, such as stress placement, intonation contours, etc. Students (subjects) seemed to have engaged well with the process and there was evidence of both uptake and subsequent student-initiated use of the gestural system.

In the literature review, Essential Haptic-integrated Pronunciation (EHIEP) is described in some detail, for the most part accurately. What is missing, however, is any reference to the critical role of touch in contributing to the effectiveness of haptic pronunciation (HPT). EHIEP is, instead, characterized as a "kinesthetic" approach, meaning: movement and gesture-based. That is, of course, correct at face value, as far as it goes, but the application of touch to the system has been fundamental for over a decade, since 2005.

What we discovered very early on was that gesture used for such "signalling" by the instructor has valuable applications, such as pointing out problems or coordination of gross motor movements such as hand clapping or dancing. What was far more problematic, however, was attempting to use gesture systematically by conducting learner body movement to help them "embody" the new or corrected sounds. Only by using touch to anchor gesture, primarily by touch on the stressed syllable but also in many cases by assigning touch to the beginning and the terminus of the gestural movement, could we consistently work effectively with pedagogical gesture.

That is particularly the case when you want learners to use gesture spontaneously or with homework assignments. If not carefully controlled and applied, gesture use is often at best only marginally effective; at worst, threatening, intimidating and highly invasive.

In other words, the key is not just what you can see someone else doing,  but how well that gesture connects up in the body, or is "embodied" with the sound element or structure being taught, corrected or practiced. And that happens most consistently when the learner does the pedagogical movement pattern (gesture) with precision, the focus of EHIEP. Touch makes that process consistent and systematic, and generally quite acceptable and emotionally "safe" for learners as well.

The general visual/cognitive bias in pronunciation teaching today is very problematic. Although it is understandable, given the often rigid and noncognitive nature of traditional drill and articulatory training models, it is simply too easy for learners and instructors to avoid the physical/kinesthetic side of the process which can be both inordinately time consuming and individualized.

At the basic instructional level, HPT is (simply) the answer.

Posted by Bill Acton at 7:44 PM No comments:

If you are in the Vancouver area in August, join us at Trinity Western University for the Ling 611 Applied Phonology course (3 graduate credits), part of the MATESOL or just the Haptic Pronunciation Teaching component of that course. (Housing available.)

Ling 611 meets on campus 9~12:00, Tuesday through Friday. August 2nd ~ 18th. Monday's are "reading days". Fridays, students in teams submit a brief research report on the week's work. During the 4th week of the course, students do an individual research paper in consultation with the instructors and take final certification test in haptic pronunciation teaching.

General syllabus:
The  topics of the 3 hours of each morning are roughly as follows:
Options: (If interested, contact me at TWU: william.acton@twu.ca)
Keep in touch!

Bill
Posted by Bill Acton at 8:45 AM No comments: