Beyond gesture: when visual-auditory-kinesthetic is not enough in pronunciation teaching!

Haptic engagement (adding touch to gesture) in pronunciation teaching began in 2005, in response to a number of potential problem(s) of using "simple" gesture in the classroom:
The intuitive "solution" turned out to be relatively straightforward:
The underlying reason or research justification for why that approach "worked" only emerged gradually . . . and recently, in fact! A new study by Fairhurst, M., Travers, E., Hayward, V. and Deroy, O. of Ludwig Maximilians-Universitat-Munchen, Confidence is higher in touch than in vision in cases of perceptual ambiguity, provides a striking piece of the puzzle.

In the experiment, subjects basically had to judge the relative length of two sticks. When the difference was more obvious, they relied solely on vision. When the difference was visually very close or ambiguous, however, they turned to touch to determine which was longer--even though the actual difference in length was actually insignificant. In other words, with touch their judgments were significantly more confident. In effect, "Seeing, as the expression goes, may be believing, but feeling is truth."

The main effect addresses the problem of movement and gesture being potentially difficult to locate consistently in the visual field of the learner and instructor. Although a pattern itself may look "the same" when performed at different locations in front of the learner, it may well not be recognized or remembered as such. (That has always been our experience.)  Unless you apply the magic . . . touch!

Touch as linked to gestural patterns such as those for  tense vowels with off-glides, where the touch occurs on the stressed vowel in a word or phrase, not only consolidates the voice and hand/arm movement and helps identify more consistent locations for the pedagogical gestures, but also gives learners confidence in finding them in the first place. That is especially the case where two sounds or patterns are both conceptually and phonologically in very close proximity, such as the space/distinction between [iy] and [ey] in English in this demonstration video from haptic pronunciation training, version 2.0. 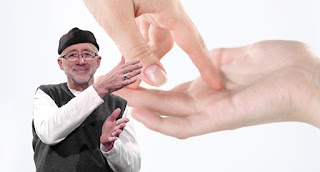 Now I realize this may all be a bit hard to "grasp" at first, but after you have had just a "touch" of haptic work, it makes perfect sense!

Need to know more and be trained in Haptic Pronunciation Training? Go here and then sign up here!

Source:
Confidence is higher in touch than in vision in cases of perceptual ambiguity, Scientific Reports, volume 8, Article number: 15604 (2018)